Pythagoreanism, merging in Crotone with the values of 'Prima Italia', in Calabria, initiated the phenomenon of Magna Graecia, which was so called by the Greeks themselves because of the irreproachable lifestyle and the height of philosophical speculation, and not because of the wealth of the poleis or the splendour of the monuments.

Pythagoreanism and the birth of Magna Graecia

Pythagoras' arrival in Croton was no accident. Ancient Kroton was already home to the first scientific medical school in the ancient world, with Alcmeon and then Democedes. It was the first non-Greek polis to excel in the Panhellenic Games and the Olympic Games. But above all in Calabria and Crotone there was a lifestyle that was different from the rest of the Mediterranean, freedom, sharing between people and the equal dignity of women were widespread. Millenary values that, thanks to Italo, founder of the 'First Italy', had penetrated the ethics and customs of the citizens of Crotone and Calabria. Suffice it to say that in nearby Locri, Zaleucus, the first European legislator, wrote in the seventh century B.C. in the second table: 'Locrians are not allowed to own slaves or female slaves'. Mankind then had to wait 2,500 years for the abolition of slavery, which took place in the 19th century AD.

A new view of history, a critical re-examination capable of clarifying multiple theses and versions

The New Pythagorean School, with the collaboration of its members, teachers and experts involved in numerous discussions and debates, has for years been drawing up studies that finally shed new light on the Magna Graecia phenomenon, Pythagoreanism and the Italic school. These topics are often academically discordant and unclear. The great work carried out by the NSP makes it possible to understand for the first time the logical links between the ancient Italic culture and Pythagoreanism; it brings to the reader's attention figures that have in part been totally ignored, such as Perictione, Plato's mother, and Pythagoras' own parents.

In addition to the numerous writings and articles written by its members, first and foremost the volumes by Salvatore Mongiardo, the Nuova Scuola Pitagorica has published a short study text entitled "Pitagora - Storia di un bambino diventato immortale" (Pythagoras - History of a child who became immortal), which it has begun to distribute free of charge in Crotone schools and on the web, with the aim of offering food for thought for enthusiasts, historians, professors and teachers, in the hope of contributing at an academic level to a functional rediscovery of "Prima Italia", Pythagoreanism and Magna Graecia. 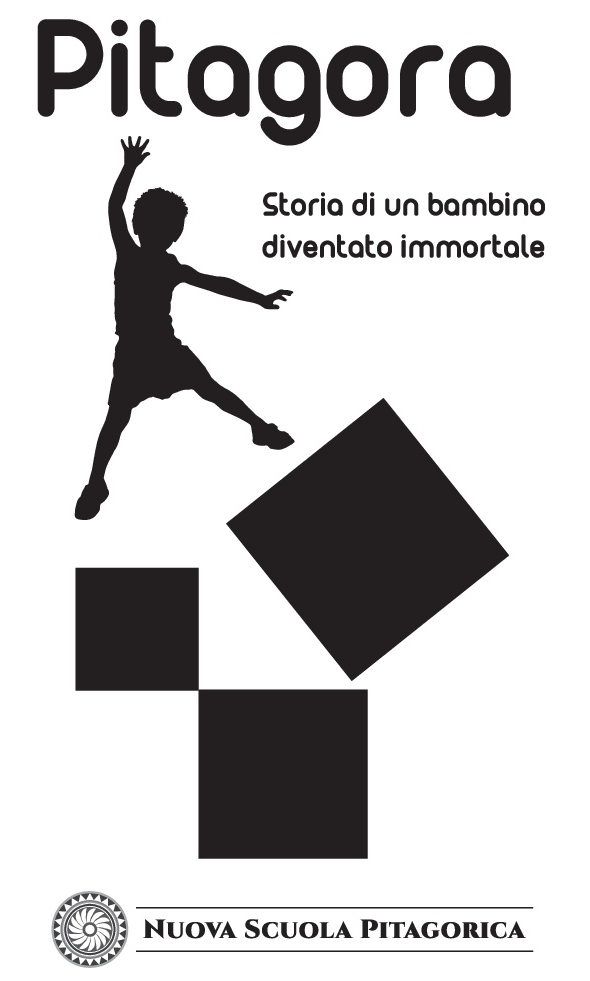 The figure of Pythagoras is commonly associated only with geometry and numbers, but in fact his teachings tend to harmoniously unify the emotional and spiritual with the rational side of the human being.

“Around 530 B.C., Pythagoras left the Greek island of Samos, dominated by the tyrant Polycrates, and came to establish himself in Crotone, which he had visited in his youth with his father...” (Porphyry - Life of Pythagoras, chapter 2).

Here, he opened his school which united life practices to scientific and philosophical speculations. “In virtue of these life practices, all of Italy (that is the actual Calabria) … thanks to Pythagoras, received the name Magna Graecia and gave birth to a great number of philosophers, poets and legislators. The Arts… and the written legislation passed on from there to Greece” (Iamblicus - The Pythagorean Life, chapter 166).

The success of the Pythagorean School in the ancient world derived from the synthesis of the culture of the populations where Pythagoras had lived: Greeks, Syrians, Hebrews, Egyptians, Chaldeans and Persians. This knowledge he then conjugated to the values practiced by Italis: freedom for slaves, communion of life and property, vegetarianism, non-competitiveness and friendship, therefore putting into place the basis for a better social organization. School was born and the Magna Graecia started to develop.

In order to fully understand the development of Pythagoreanism and the birth of the Magna Graecia phenomenon, one must therefore consider the socio-cultural situation in Crotone and Calabria before the arrival of the Greek colonists. In fact, about 1500 years before the Greek colonisation, thanks to the flourishing nature of the place and the morphology of the territory, Italy was born: founded by King Italo and based on sharing, freedom and harmony. To cite some authoritative sources that narrate the events of Italy, we can mention: Thucydides; Aristotle, The Politics, VII, 9, 2, e 10, 2-3; Antiochus of Syracuse; Strabo; Virgil, Aeneid.

It is also important to understand that immediately after the arrival of the first Greek settlers the city of Crotone around the VII / VI century BC. he began a course of study and research that in fact gave birth to the birth of modern medical science with the celebrated Medical School of Alcmeone and Democede. This context caused another sector to flourish: what we now call motor science. In fact the Krotonian Athletic School merged with the wisdom of the Medical School and it was not by chance that the Kroton athletes excelled in all the Panhellenic games, first of all Olimpia, the Olympics. The names of Daippos, Milon, Phaillos and many other champions echoed around the world.

Pythagoras chose Crotone as a suitable place to spread his doctrine, because that city was permeated by the Italian values ​​of freedom, sharing and harmony, as well as a scientific and rational approach of nature. The School thus put rationalism at the base of the scientific method, aiming for the rest to create a just society, oriented towards wellbeing and peace.

For many years the initial Pythagorean project started by Crotone went on to find a huge diffusion first in the neighboring cities and then in other Mediterranean countries. The Pythagoreans thus began to influence and effectively govern public assemblies, but the following events led to an insurrection against Pythagoras. Many Pythagoreans were killed and Pythagoras himself had to flee to save himself.

That dispersion seemed the end, but instead disseminated the Pythagorean doctrine everywhere. In fact, already fifty years after his death - which occurred around 497 a. C. - the figure of Pythagoras appeared on coins of Asia Minor, something never done before for a character who was not a ruler or divinity.

His doctrine was taken up and studied by great Greek-speaking philosophers and historians such as Heraclitus, Plato, Aristotle, Empedocles and Herodotus, Josephus and Philo of Alexandria, just to mention the most famous, and a long line of commentators, playwrights and writers. Those authors spread the knowledge of Pythagoras in the Greek-speaking world, and then reflected in the Roman world, which was expanding and opening up to Greek culture. In the Roman world, in fact, wrote in Latin on Pythagoras: Cicero, Tito Livio, Varrone, Vitruvius, Pliny the Elder, Marziale and Ovid, just to mention the best known.

The south of Italy, today’s Calabria in particular, underwent from then onwards an unstoppable decadence which has lasted up to the present day. This can mainly be attributed to the loss of identity brought about by successive foreign occupation and domination, which violated all of the Italic and Pythagorean principles: Hannibal, Pyrrhus, Roma, Goth, Longobards, Byzantine, Arab, Saracen, Norman, Angioine, Aragonese and Spanish…

They were all dominations that plundered and took liberty from the people who, before the arrival of Pythagoras, had forbidden all forms of slavery with the laws of Zaleuco in Locri. In fact, Pythagoras came to Crotone in search of Italy and its lifestyle that he understood, welcomed and proposed to the world. Thus Magna Graecia had a mother, Italy; a father, Pythagoras; and a capital, Crotone.

The world and humanity thus followed a path opposite to the teaching of Pythagoras, they went in the anti-pythagorean direction.

We can now imagine Pythagoras who, considering the succession of wars, injustices and genocides from his times to ours, shakes his head saying: It has been proven! I told you so!

The historical review carried out by the NSP shows that the Italico-Pythagorean ethical principles are as immutable as the rules of mathematics. The heart of the Pythagorean doctrine is in those principles that, if observed, bring happiness, do not observe you, instead, they bring mathematical chaos and pain with certainty.
We quote textually the judgment of two ancient authors on Pythagoras.

And Iamblichus wrote in Greek:
Pythagoras founded rationalism by teaching how to attain truth through the science of numero, invece dell’osservazione delle viscere delle vittime.
He recommended to reject his own glory, riches and the similar things.
Invitava a evitare l’avidità di guadagno, la cupidigia, l’ira, l’ambizione.
Esortava alla mitezza e alla mansuetudine perché l’atteggiamento fiero e indomabile produceva boldness, dullness and anarchy.
He was convinced that nothing happens by himself or accidentally, but everything is in conformity with divine providence.
Affermava che non c’è nulla in cui non si possa sperare: tutto si può compiere e non c’è nulla che can not be accomplished.